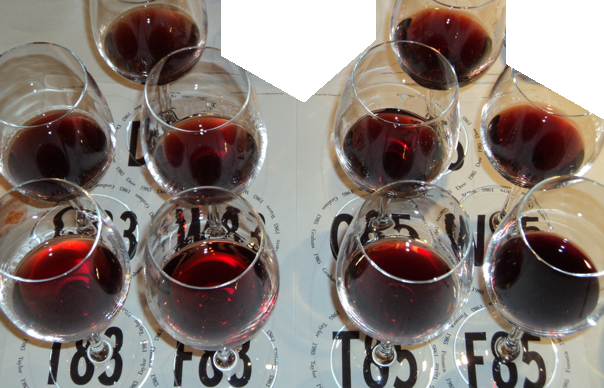 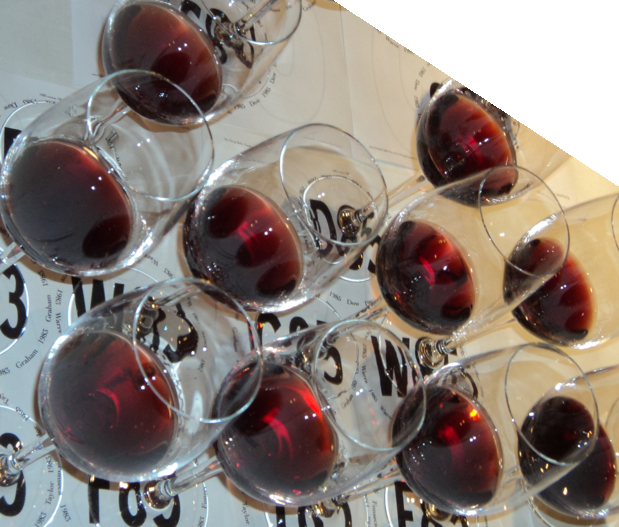 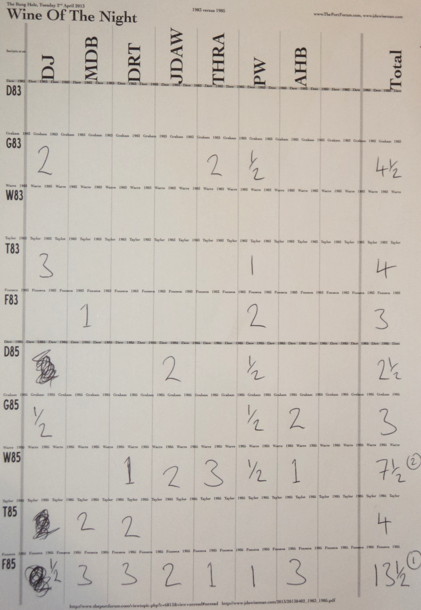 1985 defeated 1983. Even though several of the same-shipper comparisons were close, everybody thought that the younger vintage beat the elder by four-to-one or five-to-zero.

Initially I was four-to-one, but the Dow 1983 fell apart over the evening, moving it to a whitewash.

This is, of course, a complete fiddle. We chose shippers that did not have cleanliness problems in 1985. Had we randomly chosen a selection of shippers, there would have been plenty of ’85 duffers.

Anyway, five regulars and two first-timers all seemed to have a splendid evening.
Top

I awake at some point in the middle of the night. I am still wearing all my clothes. Somehow, though, I must have been able to take my boots off before falling unconscious.
What...? How..? Who..?
I still seem to have all my possessions.. Looking around I recognise this bedroom.
Memories begin to surface. Phrases.. Faces..
Dozens of 20 cl bottles that the East Coast line sold off..
The big fortified tasting..
Rare chateaubriand..
Oh. And port. Yes. Port.
Tasting notes and other impressions to follow.
Daniel J.
delete.. delete.. *sigh*.. delete...
Top

"The first duty of Port is to be red"
Ernest H. Cockburn
Top

Did you wake in Brighton? Or in a siding at the end of the Circle line?

Others have been known to suffer a similar fate to you. But you seem to have been caught by the good Port fairy and not the bad Port fairy.

AHB wrote:How was the head the next day? Did you drink enough water?

I definitely need to drink more water next time. I amazed myself by getting back to Wandsworth without issues.
TN follows soon..
Daniel J.
delete.. delete.. *sigh*.. delete...
Top

A caveat regarding my TNs: I think my nose was not really very alert on the evening, I found it hard to find aromas from a few wines and while initially this was perhaps thought to be the glass I don't believe they can all have been tainted. I think my olfactory equipment was compromised somehow. Does anybody else find slightly smaller glasses easier to taste with?
Daniel J.
delete.. delete.. *sigh*.. delete...
Top

Your TNs are fine: I like the idea that F85 ‟was sniffing me back”.
Top

jdaw1 wrote:Your TNs are fine: I like the idea that F85 ‟was sniffing me back”.

1985 defeated 1983. Even though several of the same-shipper comparisons were close, everybody thought that the younger vintage beat the elder by four-to-one or five-to-zero.

As my birthyear is 1983 I took a particular interest in this vintage over the last few years. I even did several comparing tasting with the 85s.

After all in generell I agree with your opinion Julian. The most 1985 VP look not so much matured and more concentrad, more complex and more powerful. Apart from some examples who had very bad luck with 1985 (f.e. Niepoort, Cockburn) I would prefer 1985 instead of 1983 for storing.
"An one litre bottle [of port] is the right size for two persons, if one person doesnÂ´t drink." - Dirk Niepoort
--------
http://www.passion-port.de
Top
Post Reply
14 posts • Page 1 of 1