Talk about anything but keep it polite and reasonably clean.
Post Reply
69 posts

LGTrotter wrote:i thought I would take advantage of the hiatus in this cultural thread to introduce a cultural concern of my own which I was originally going to address to Andre only. But on consideration I think I should throw it open to all comers.

How should I approach the poet Rilke?

I have an anthology, with translation by the rather pleasingly titled Michael Hamburger. However I find the poems rather soaring, almost with the nausea of motion and I distrust the translation.

I must admit that I never read poetry, so I don't know Rilke. But from what I read online at Project Gutenberg I must say that his poems are kind of weird and boring.

But I doubt that other translations would improve your liking of Rilke much.
The Eleventh Commandment: Thou shalt know thy Port
Top

We have gone from Top Gear to translations of Rilke. At least one must be off-topic, because they cannot be the same topic.
Top

Owen, have you read Antonio Tabucchi's novel 'Pereira Maintains'? I heartily recommend it if not; if you've ever read and liked Saramago you'll enjoy it. I mention it because I just read it the other day and was amused at the description of Rilke therein, which was not unlike André's. The book is set in Lisbon in 1938 as the fascists are closing in. There is more than one mention of 'dry port'.
Have you ever tried Heine? Of course, Marx was a fan. But I've never got round to him myself.
Daniel J.
delete.. delete.. *sigh*.. delete...
Top

djewesbury wrote:Have you ever tried Heine? Of course, Marx was a fan. But I've never got round to him myself.

Heine is a good suggestion. He wrote intellectually sharp satire, which I think Owen will like. In addition to that, he wrote a lot of prose which is easier to translate than poetry. By the way: somehow Owen bears a resemblance to Heine:
http://en.wikipedia.org/wiki/Heinrich_H ... _Heine.PNG
The Eleventh Commandment: Thou shalt know thy Port
Top

You're right, of course. The thread should be renamed Cultural Studies.

Good suggestion. Or we might name it "A place for the Highbrow" 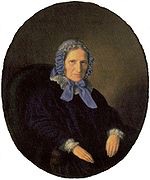 Well it's about time somebody noticed my new bonnet. Thank you Andre, you say the nicest things.
Top

Owen, there was no offence intended. It was meant as a compliment.
Is your picture of portrait of Madame Clicqout?
The Eleventh Commandment: Thou shalt know thy Port
Top

AW77 wrote:Owen, there was no offence intended.

I know that Andre, the picture is from the Wiki link for Heine, it is his mother and the picture made me laugh. She does look like Madame Cliquot, with a touch of Whistler's mother thrown in.
Top

I happen to agree with André. There is a dashing look about young Heinrich which certainly reminds me of you, Owen.
Daniel J.
delete.. delete.. *sigh*.. delete...
Top

He's been sacked, my favorite show will never be the same

It is a sad day for Top Gear.
Glenn Elliott
Top

djewesbury wrote:Not at all. I can smell the future coming.

Or this might just be the smell of JC's exhaust.

Well I have a meeting with a senior exec in the Beeb next week. A coincidence? Or a pinko takeover? You decide.
Daniel J.
delete.. delete.. *sigh*.. delete...
Top

I'd just take the crew and do it on another channel...
F1 | Welsh Corgi | Did Someone Mention Port?
Top

Does the UK have another channel?

If Sky want to plough in the millions that the BBC committed to this programme, let them. Everyone goes on about what an asset this programme was to the Beeb, generating many millions in worldwide sales. Yes, of course. But it was also built up by the BBC, over years, using their expertise and their enormous resources. I would imagine it's one of the most expensive factual programmes out there.
Shouldn't Clarkson be a little more grateful for the wonderful career the BBC gave him? He seems to be a very ungracious millionaire.
Daniel J.
delete.. delete.. *sigh*.. delete...
Top

He isn't likely to find himself alone in that room.
"The first duty of Port is to be red"
Ernest H. Cockburn
Top

He isn't likely to find himself alone in that room.

Filtered through a very long trans-Atlantic lens, he actually appears to be rather pragmatic about it. He seems aware of the fact that he's an arse, seems mildly ashamed about it, but doesn't care enough to put in the (likely tremendous) effort required to change. In other words, he's okay with who he is even though he knows he's an arse.

In this particular case he let his temper get the best of him, screwed up badly, realized he'd screwed up badly, apologized in person (or at least tried) to the victim, and then reported himself for his actions knowing full well that he would probably be fired over it. I haven't seen anything indicating that he's trying to deflect blame in any way. He's owning his actions and seems sincerely sorry for it. Of course it's easier to be sorry when you know that it's not going to have any real impact on your career, but it does seem genuine from this side of the Atlantic.

That's an arse I can tolerate and maybe even support. If I were his boss I'd assign him a full-time handler, and that handler's job description in its entirety would be "do not allow Jeremy Clarkson to cross any lines. Tackle him if necessary. You are not his friend, you are his leash." It would be a cushy job, except when it wasn't.

Top Gear could be fine without Clarkson. They'd have to find the right person, but I like Richard better than Jeremy anyway. Jeremy's role (to me) is similar to the guy on ESPN who sits at the desk with the former NFL players and analysts and directs questions to them. He's the facilitator, but not actually key to the discussion. Jeremy's also one of the "experts" on Top Gear, but really his key role is to facilitate. That should be easy enough to replace, provided Hammond and May are willing.
Glenn Elliott
Top

I can't find the link to Stewart Lee's great riff about Richard the hamster Hammond, who isn't a real hamster. Or maybe I can't be bothered posting it.
Daniel J.
delete.. delete.. *sigh*.. delete...
Top

Top Gear existed long ago, before Clarkson, if I recall correctly. Ah yes. Wikipedia confirms it was initially commissioned in 1977 and was presented by - wait for it - Angela Rippon! Be still my beating heart!
Daniel J.
delete.. delete.. *sigh*.. delete...
Top

In fact Clarkson has left once before (but nobody remembers because nobody cared). The rest of the team then decamped to Channel 5.
Daniel J.
delete.. delete.. *sigh*.. delete...
Top
Post Reply
69 posts