From time to time we receive press releases and news bulletins from producers and their representatives and these tend to get scattered throughout the forums. I thought it would be easier for future reference if these were given their own thread especially if, as I hope, we will start to receive more of these directly in the future.
Top Ports in 2019 (so far): Cockburn 1947 and Quinta do Noval Nacional 2017
2018 Ports of the year: São Leonardo 1927 White Port (Bottled 2018), Quinta do Noval Nacional 1994
Top

If so, perhaps this would be worthy of a separate sub-forum, rather than just a thread?
It would also provide more visibility per press item, which might be appreciated by the producers.
Top

In an email dated 20 May 2015 Viera de Sousa wrote:Viera de Sousa is proud to announce the following wines were awarded medals by the Decanter International Wine Challenge. 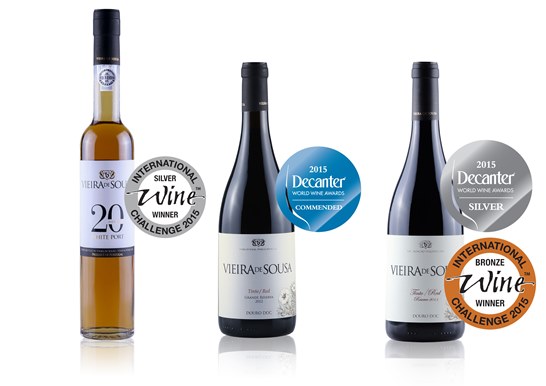 Definition: This wine is produced exclusively from selected plots on the Quinta and trodden by foot in our lagares and is only declared when various factors combine to make an exceptional year. Elegant pure and aromatic, this wine is adapted to age in bottle, developing over years, releasing a complex variety of flavours.

Vineyard Location: The wine was made entirely from grapes of QUINTA do NOVAL - Vale de Mendiz - Pinhão - in the heart of the Douro Valley.

Barrel Time: 18 months in wooden barrels in the air-conditioned cellars of the Quinta, at the demarcated region of the Douro Valley before bottling.

Vintage Conditions: In 2013 the winter was extremely wet, and rain continued to fall heavily until April 2013. This was beneficial because it restored the soils water reserves, which were very low after 2 dry years. Then a cool and wet spring preceded a dry hot summer, with virtually no rain. These climatic conditions conditioned the evolution of the vegetative cycle, resulting into a low production year and delaying ripening in the vineyards by 10 days. Rainfall occurred on September 5, although a little late, gave us new courage. So we decided to wait a few days. The grapes improved significantly and we started on September 10th, with grapes in perfect health and maturation that produced musts of extremely high quality. The wines that make up our 2013 Vintage Port were made from grapes harvested in this initial period.

Subsequently it rained between September 27 and October 3, which increased the moisture content to 80 or 90%, leading to favourable conditions for the emergence of botrytis, so we had to accelerate the pace of the harvest to bring the grapes in in healthy condition. Good wines were made in this latter period, but the outstanding lots were produced in the earlier part of the harvest.

Vinification: Grapes were trodden by foot to obtain the must, then during fermentation macerate to obtain the best possible extraction in the lagares, the traditional stone vats from the Quinta.